To share your memory on the wall of Janet Pryde, sign in using one of the following options:

To send flowers to the family or plant a tree in memory of Janet Pryde, please visit our Heartfelt Sympathies Store.

Receive notifications about information and event scheduling for Janet

We encourage you to share your most beloved memories of Janet here, so that the family and other loved ones can always see it. You can upload cherished photographs, or share your favorite stories, and can even comment on those shared by others.

Posted Mar 02, 2019 at 12:00am
My sincere condolences to the family. Rex, Tommy, Sue, Donny and Dixie. Janet Rose was always such a nice person to me as well as many others. She loved life and the friends and family around her. I was very sad to hear of her passing. I know she will be missed dearly. Dry your eyes and smile. Janet Rose would want it that way . Prayers and thoughts to you all .
Comment Share
Share via:
DM

Posted Mar 02, 2019 at 12:00am
Dear Pryde and Catherine Family, I am so saddened to hear of your loss and I send lots of love and prayers your way. Janet Rose is a beautiful soul and I'm sure that she is spreading her love and sunshine all over heaven now, along with her Mom and Dad. Such a lovely family! God keep you all and heal your hearts. I know that you will miss her presence for a very long time. Blessings and love to you. Lauria Bell-Hughes
Comment Share
Share via:
SL

Posted Mar 01, 2019 at 12:00am
Dear Rex, Tommy, Susie, Donnie and Dixie—Janet Rose always made me smile when I saw her—her happiness was contagious. ?? I’m sure Uncle Toby and the Catherine/Whitehead crew all welcomed her with a smile and a beer. Love you all. ?? Sal
Comment Share
Share via:
MM 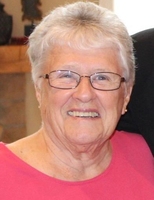