To share your memory on the wall of Jane Bryan, sign in using one of the following options:

To send flowers to the family or plant a tree in memory of Jane Bryan (Smeal), please visit our Heartfelt Sympathies Store.

Receive notifications about information and event scheduling for Jane

We encourage you to share your most beloved memories of Jane here, so that the family and other loved ones can always see it. You can upload cherished photographs, or share your favorite stories, and can even comment on those shared by others.

Posted Apr 19, 2019 at 07:19pm
I have fond memories of Jane and her husband Les. I met her when I became friends with her daughter Kay. Kay and I had children of the same age. Jane would treat my children as if they were her own grandchildren. She and Les would take them to church with Kay's children. Jane was kind, thoughtful and I enjoyed visiting with her. She was everybody's mom, and grandma. I know she will be sadly missed by all. She was like the woman you read of in Proverbs. I believe that after Jesus welcomed her home, she and Les walked hand in hand again. Prayers to the family.
Comment Share
Share via: 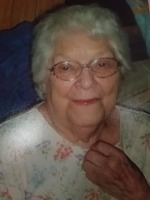