To share your memory on the wall of Frederick Fenton, sign in using one of the following options:

To send flowers to the family or plant a tree in memory of Frederick Fenton Sr., please visit our Heartfelt Sympathies Store.

Receive notifications about information and event scheduling for Frederick

We encourage you to share your most beloved memories of Frederick here, so that the family and other loved ones can always see it. You can upload cherished photographs, or share your favorite stories, and can even comment on those shared by others.

Posted Jan 30, 2019 at 12:00am
Zachary and I are Sadden to hear the passing of Fred. We know that the family is heartbroken and rejoicing at the same time knowing he now is with the Lord. I will always remember Fred as being so kind to us at First Baptist and always made us feel welocomed. I loved that he always spoke his mind and never mixed words but always with the love of Christ Know that we truly loved and respected Fred. We love all of you and are sending our love and prayers . Beth and Zachary Bordas
Comment Share
Share via: 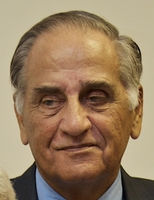