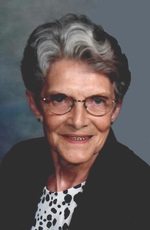 Cleo J. Fleck, 87, of Westminster Place South at Windy Hill Village, Philipsburg, passed away Tuesday, July 16, 2019 at Mount Nittany Medical Center, State College. Born September 14, 1931 in Philipsburg, she was a daughter of the late Willard D. & Hannah Z. (Shimmel) Goss. Cleo was a 1949 graduate of Philipsburg High School and had worked at Book Binder, Riverside Market and General Cigar. She was a member of Grace United Methodist Church, Philipsburg and Silver Sneakers. She enjoyed jigsaw puzzles, reading, volunteering at the former Philipsburg Hospital and attending the social gatherings at Westminster. On September 24, 1953 in Philipsburg, she married Harry L. Fleck, who passed away April 11, 2009. Cleo is survived by a son H. Drew Fleck and wife Kathy of Osceola Mills; a sister Erla Jodan of Hollidaysburg; and a granddaughter Jessica Wagner and husband Bob. In addition to her parents and husband, she was preceded in death by a brother Eldon Goss and two sisters Dorothy Gordon and Louise Byers. Honoring Cleo’s wishes, there will be no public visitation. A private funeral service will be held at the convenience of the family at the Dahlgren-Spewock Funeral Home, Inc., 228 N. Centre St. Philipsburg with Pastor Michelle R. Bodle officiating. Cleo will be laid to rest at the Philipsburg Cemetery. Memorial contributions in Cleo’s memory may be made to St. Jude Children’s Research Hospital, 501 St. Jude Place, Memphis, TN 38105 or online at www.stjude.org.
Online condolences to the family may be made at www.dahlgren-spewock.com

All rights reserved. This obituary is also archived at obittree.com